DUBLIN, Ireland - Creative Technology Ltd today announced it would be showcasing a full range of Sound BlasterX pro-gaming products at the inaugural GamerCon 2017 event in Ireland. Creative is delighted to participate in Ireland's largest gaming event in Dublin, with over 20,000 gamers expected across two days in the Convention Centre Dublin on 18 and 19 March 2017.

Creative's Sound BlasterX gaming headsets will be the official headset of GamerCon and can be experienced on all PCs and consoles in the ‘Gamer Zone' at GamerCon. In addition, the Sound BlasterX booth will showcase a line-up of award-winning pro-gaming products which include gaming audio solutions that deliver best-in-class audio as well as high-performance peripherals that offer precise control and swift execution for gamers:

“The Creative Sound BlasterX Katana is as much of a deadly weapon as its namesake. It may be compact and slim, but it gives a stellar performance that's sure to put a smile on anyone who cares about high-end audio performance in their favourite movies, music, games and more!”
- Editor's Choice Award, eTeknix

“Gaming mice need to be precise, responsive, and reliable, and the Sound BlasterX Siege M04 is all of these things with the added bonus that it appears to be floating on a rainbow.”
- Gold Award, Vortez

“It can be comfortably worn throughout the whole day at the computer, it feels rock solid, looks good and works with all your devices... Never have I been able to live in my game so much, a big thank you to Creative.”
- 10/10, Gamereactor.dk 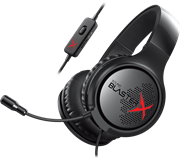 “The Creative Sound BlasterX H3 is a very well made gaming headset, Creative has done a fantastic job developing and engineering a masterpiece of a headset with high quality audio.”
- The Tech Insider

“The noise cancellation is on point, and the responsive bass and rich audio are both delivered as promised on the packaging. Using this set in Dota 2, I'm able to hone in on different sounds and multitask well.”
- Editor's Choice Award, TweakTown

The Sound BlasterX line-up, apart from the gaming headsets, come with the fully customizable Aurora Reactive lighting system featuring a brilliant spectrum of 16.8 million colours inspired by earth's natural phenomenon. This is sure to please gamers who are looking to build a neat gaming and entertainment space with unique displays of light.

The Sound BlasterX team will host André “BARBARR” Möller, captain of the Epsilon eSports CS:GO team at GamerCon, Dublin. BARBARR, a veteran in the Counter-Strike scene since CS 1.6, will demonstrate Sound BlasterX products, play against attendees at the booth, and give press interviews about the world of eSports. BARBARR is from Malmo in Sweden and is based in Dublin. Creative is a sponsor of the Epsilon eSports organization which has teams competing around the globe.

This announcement relates to products launched in the United Kingdom and Ireland. Availability is subject to change without notice and may differ elsewhere in the world according to local factors and requirements. Creative, the Creative logo, Sound Blaster and the BlasterX logo are trademarks or registered trademarks of Creative Technology Ltd in the United States and/or other countries. All rights reserved. All other trademarks are the property of their respective owners.