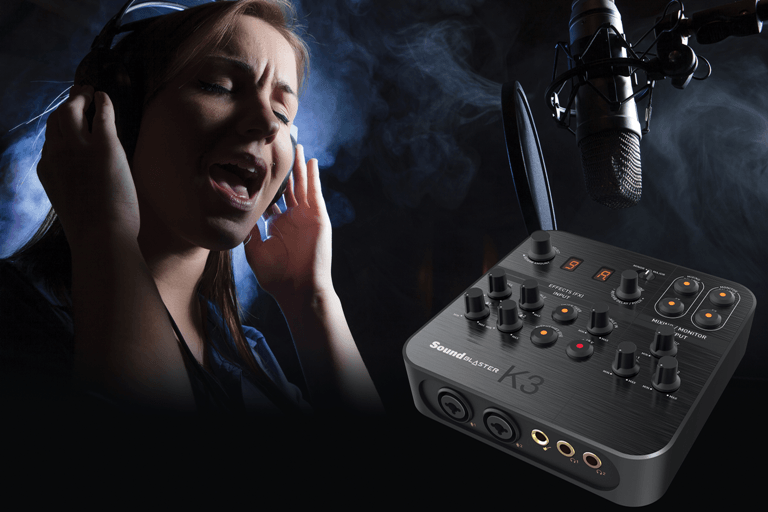 The Sound Blaster K3 was developed in part by a number of broadcasters, singers, musicians, and audio engineers. Their feedback has allowed us to understand various recording needs, and has resulted in a practical, professional recording interface that boasts incredible connectivity options.

“In today's interconnected world, the way we create, share, and consume music and entertainment has transformed dramatically. It used to be that musicians and budding musicians were limited to being physically present to perform music, or getting airplay on traditional broadcast mediums like radio or TV. But today, you can reach the world from your room through live streaming. The Sound Blaster K3 will up your game and enable you to sound the best you can be for your audience. It contains top-notch componentry, convenient controls and versatile connectivity to ensure your broadcasts are of the best possible quality so that your music and vocals shine through,” said Low Long Chye, General Manager of Creative.

Creative is partnering with two popular live streaming platforms in Singapore, BeLive and Loops, to introduce the Sound Blaster K3 to their community. Creative collaborated with BeLive in the “Busking Robin” series which invites singers to play games, chat and sing according to different themes every week. The Sound Blaster K3 was also featured on “Beyond the Talents”, a talent-incubation broadcast program on Loops. The Sound Blaster K3 was intrinsic in enhancing the audio quality of these two programs as part of its live streaming broadcast setup. Creative is also working with multiple well-known local streamers to inspire other upcoming musicians and streamers about the possibilities they can have with the Sound Blaster K3 in their own broadcast and content creation.

“Previously, posting a music video was a painful process - I had to shoot the video with my DSLR, and then record my singing separately using a professional recording device because the built-in mic on cameras and phones isn't good enough, before finally combining both video and audio recordings into one and editing them on my computer to make it perfect. Ever since I started using Sound Blaster K3, recording live song covers has been a breeze! Now, I just plug in my mic, instrument and phone and I'm good to go live,” said Yap Yoke Ling aka “Yokez”, Singapore singer-songwriter.

To find out more about Sound Blaster K3, visit sg.creative.com/k3.

This announcement relates to products launched in Asia Pacific. Availability is subject to change without notice and may differ elsewhere in the world according to local factors and requirements. Creative, the Creative logo, and Sound Blaster are trademarks or registered trademarks of Creative Technology Ltd in the United States and/or other countries. All rights reserved. All other trademarks are the property of their respective owners.