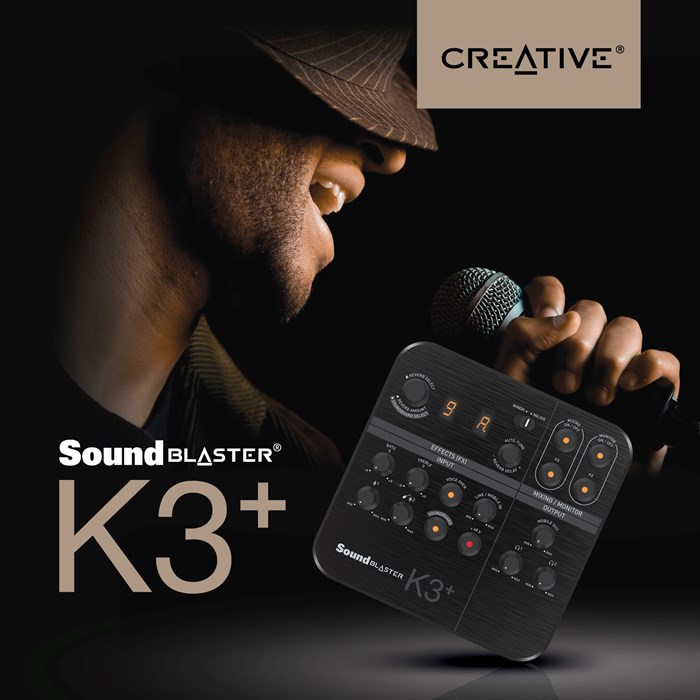 SINGAPORE - 6 April 2018 - Creative Technology Ltd announced the Sound Blaster K3+ today. The compact and portable mixer is targeted at today's generation of online influencers and content creators, such as musicians, podcasters, live streamers, vloggers, and more. Sound Blaster K3, the predecessor to the K3+ was well received in Asia, particularly in China. The K3+ captures the goodness of its predecessor, the Sound Blaster K3, while being enhanced further with additional features.

Like its predecessor, Sound Blaster K3+ was developed in part by a number of broadcasters, singers, musicians, and audio engineers. Their feedback has allowed Creative to understand various recording needs, and has resulted in a practical, professional recording interface that boasts incredible connectivity options.

“We're proud to be part of that amazing journey in helping people to express themselves through the content they create,” said Low Long Chye, General Manager of Creative. “The Sound Blaster K3+ is a full-fledged portable mixer with a wealth of features that allow any budding musician, comedian, live-streaming gamer or vlogger to customize their content and broadcast in amazing quality. And because it's so compact and easily powered via USB, they can broadcast live from almost anywhere with just a mobile phone, the book-sized K3+, and a USB powerbank.” 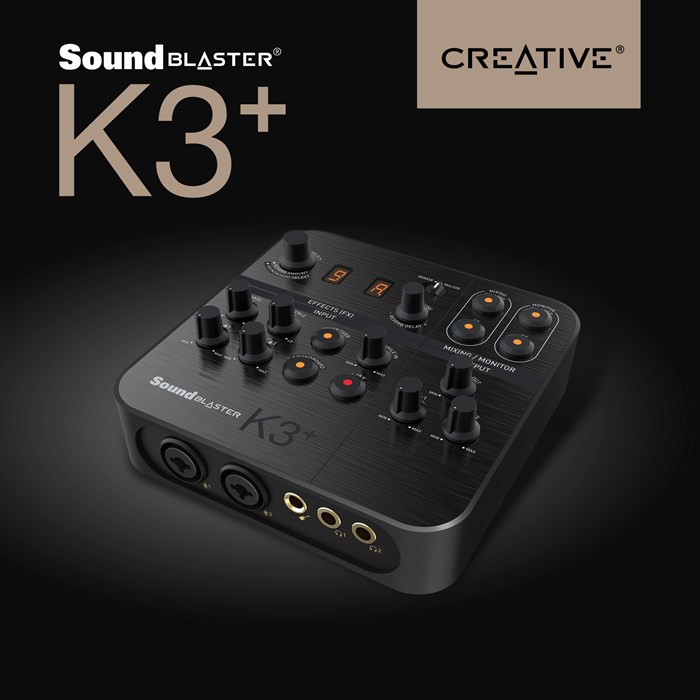 About Sound Blaster K3+
The Sound Blaster K3+ is a portable sound mixer with hardware audio processing such as reverb and autotune. It boasts multiple connectivity inputs, supports both dynamic and 48V phantom powered condenser microphones, and features individual input/output gain control. The all-new K3+ also features six special sound clips to enhance live broadcasts, a dedicated mobile output volume knob, and even allows users to connect multiple units together when broadcasting as a band or a group.

For those interested to watch a live presentation featuring the Sound Blaster K3+ at launch, a Facebook Live event will take place at https://www.facebook.com/SoundBlaster/ on Friday 6 April, 10am PDT (US Pacific Day Light Time).

To find out more about Sound Blaster K3+, visit Creative.com.

This announcement relates to products launched in Asia Pacific. Availability is subject to change without notice and may differ elsewhere in the world according to local factors and requirements. Creative, the Creative logo, and Sound Blaster are trademarks or registered trademarks of Creative Technology Ltd in the United States and/or other countries. All rights reserved. All other trademarks are the property of their respective owners.