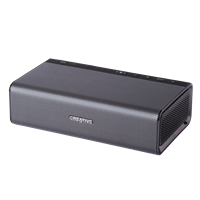 LAS VEGAS – January 6, 2014 – Creative Technology Ltd at CES 2014 previewed a heavyweight contender in the wireless speaker market – the Sound Blaster Roar delivers amazingly powerful, precision-tuned, high fidelity sound from a compact, portable booklet size. A product of years of research in speaker design and technology, the speaker represents the pinnacle of portable wireless audio, and marks the redefinition of the home stereo market.

With a sleek metallic finish, measuring only 7.9 x 2.2 x 4.5 inch and weighing less than 2.5 lbs, the Sound Blaster Roar packs a punch in audio performance. Beyond its astounding audio performance, the Sound Blaster Roar also comes with several useful features, such as speakerphone teleconferencing, a microSD slot for MP3/WMA/WAV playback and audio recording, a siren, Bedtime Mode and Life Saver Mode.

Pricing and Availability
The Sound Blaster Roar is targeted to be priced aggressively below US$200 and will be available in the spring of 2014.

About Creative
Creative is a worldwide leader in digital entertainment products. Famous for its Sound Blaster® sound cards and for launching the multimedia revolution, Creative is now driving digital entertainment with cutting-edge audio solutions, premium wireless speakers, wireless headphones and portable media devices. Today, Creative re-invents the Sound Blaster, which has a user base of over 400 million, with its ground-breaking Sound BlasterAxx that aims at the new mobile networked generation by bridging the worlds of the computer, smartphones, and tablets. Creative’s proprietary technologies, innovative hardware, applications and services leverage the Internet, enabling consumers to experience high-quality digital entertainment - anytime, anywhere.

This announcement relates to products launched in the United States. Availability is subject to change without notice and may differ elsewhere in the world according to local factors and requirements. Creative, the Creative logo, Sound Blaster and Sound BlasterAxx are trademarks or registered trademarks of Creative Technology Ltd in the United States and/or other countries. All other trademarks are the property of their respective owners.