Latest USB DAC and AMP Fitted with Super X-Fi and SmartComms Kit to offer an Enhanced Audio Experience for Movies, Music, Games, and even Conference Calls 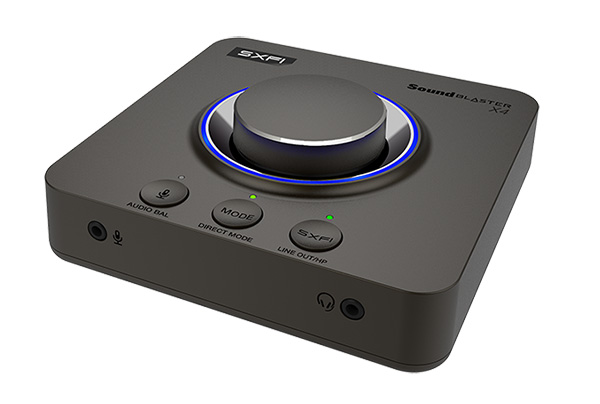 Audio Knockout with Super X-Fi
The Sound Blaster X4 features the game-changing Super X-Fi technology, which garnered 23 best-of awards at CES 2019-2020. It recreates the soundstage of a premium multi-speaker surround system in headphones, and personalizes it for a natural listening experience. Users will be able to enjoy a transformative audio experience that offers greater surround envelopment, depth, immersion and spatialization effects - like in a real cinema, a gaming battlefield or a concert hall.

The Sound Blaster Signature
The renowned Surround Virtualization technology, developed with more than 30 years of Sound Blaster's audio expertise, is yet another highlight for the Sound Blaster X4. It enhances the spatial information of the incoming audio and optimizes it to offer users a complete and immersive auditory experience, up to 7.1 discrete and virtual audio channels.

The Sound Blaster X4 comes equipped with the capability to drive studio-grade headphones of up to 600Ω with 114 dB audio clarity and 24-bit/192 kHz high-resolution playback.

For Simpler yet Smarter Communication
With the all-new SmartComms Kit, the Sound Blaster X4 serves as a versatile sound card that can offer users a simpler yet smarter way to communicate online. The VoiceDetect Feature allows users to speak freely without worrying about the mute button as the mute status switches based on voice detection — the microphone gets unmuted instantly when the user's voice is detected and is muted automatically when no further speech is detected. There is no need to meddle with any buttons, and users can stay focus on the conversations without any disruption.

On top of that, the two-way noise cancellation feature also works to reduce unwanted static background noises during online calls at both ends — NoiseClean-in for incoming audio and NoiseClean-out for outgoing audio — to deliver crystal-clear communication. Whereas, the CrystalVoice technology works to enhance the voice for clearer recordings and in-game communications. For users looking to explore more interesting features, the Voice Morph can offer that fun element as it changes the user's voice into different characters and accents with a list of tuned profiles.

These features are all conveniently accessible and customizable through the all-new Creative app, which is a new software platform available on both desktop and mobile with an integrated user interface across Creative's products.

Versatile Connectivity
Fitted with a newly added optical/line-in port, users have a more comprehensive range of options to connect the Sound Blaster X4 to multiple audio devices, from external microphones and headsets to PC, Mac, PS4, PS5, Nintendo Switch and even the multi-channel speaker systems to instantly upgrade the audio quality and transform one's desktop setup into an one-in-all audio hub.

Fuss-Free Controls
The Sound Blaster X4 offers users hassle-free controls with a sleek turn knob design and an elevated look and feel compared to its predecessor. It is also fitted with dedicated buttons for Audio Balance, Audio Mode selection, Super X-Fi mode, as well as a speaker (Line-out) and headphones switch button to make it easier to toggle between devices.

Users can also easily control the volume levels between two audio sources with the Audio Balance feature on PC, Mac, PS5, or PS4. Once the setup is done, users can simply adjust the volume mix on the volume control knob by turning the knob left to right, and vice versa— a feature that will come in handy for users during conference calls while listening to music or podcasts, or while communicating in-game with teammates.

The Sound Blaster X4 also comes decked out with customizable EQ modes —Music, Movies, and Footsteps Enhancer—each of them specially tuned to enhance audio for different types of content to deliver the optimal audio experience.

With excellent audio performance, greater connectivity options, and smarter features, the Sound Blaster X4 is the perfect all-rounder sound card to work, learn and play from home with.

Pricing and Availability
Sound Blaster X4 is attractively priced at S$219 and is available at Creative.com.